Good news: The contractions have calmed down, if not stopped completely.

Since our last entry, Terri has cancelled all her work dates. A doctor's appointment tomorrow will confirm whether or not Terri is done working for the rest of the pregnancy.

The overwhelming consensus from friends and other women who have worked: STOP. But we'll get the "official" word tomorrow than make a decision.

Last Friday (June 17) Terri had another non-stress test. The results were much more encouraging than last time: No contractions, with strong heartbeats from both babies.

It seems that the bed rest and relaxing at home are doing the trick. Just to be sure, Terri is limiting herself to one errand a day, if that.

So now we continue to wait, to hope, and in the words of our friend Kathy, we silently urge the twins to: "Grow Babies, Grow!!"

Bad news: There is not a whole lot for Terri to do at home!

David went to the library and got a bunch of books for Terri to read. But there is only so much reading and watching of T.V. to be done.

Terri is handling it like a trooper. She rests as much as she can. The problem is that she is already carrying the equivalent of a full-term single baby -- and these babies are still growing.

The effect on Terri's ability to breath is now noticeable when Terri is lying on her back. So she almost exclusively lays on her left side.

Even that isn't terribly comfortable. The other night, Terri woke up at 3:00 A.M., and couldn't go back to sleep. Luckily, not working means Terri is able to make up the sleep through naps during the day. And she's so great she didn't even wake up David.

Our third of three Lamaze classes is this Thursday. It's been fun to meet other couples in the same stage of pregnancy we are.

Also, our instructor is a very nice woman. She is even showing the class a video of a twin birth -- just for us! We don't have the heart to tell her that our doctor has said we are almost certainly a c-section, and will therefore not likely use anything of what she has taught us!
Posted by David Lim at 6/21/2005 11:13:00 PM No comments:

Last Friday we went for our Week 29 ultrasound. The good news: the Babies are healthy and growing. (See the Ultrasound photos below)

After the ultrasound, Terri was hooked up to some sensors for a non-stress test, designed to monitor the Babies' heartbeats and detect any contractions. Everything seemed to be going very well. The heartbeats were strong, and nothing seemed amiss.

"How are you feeling?" asked the nurse. Not once, but twice.

"Any cramping?" "Any pressure?"

The nurse fussed over Terri for over 15 minutes.

Terri had been feeling some tightness for the past week or so, but we attributed it to Braxton-Hicks contractions.

"No," the nurse confirmed. "You are having contractions. Five minutes apart."

Turns out the contractions were so slight, Terri could not feel them. That was good news.

If the contractions were larger, obviously we would have been in worse shape.

Still, any contractions in Week 29 is not good.

The nurse called our Doctor, who gave very specific orders:

Go home IMMEDIATELY. Get on the couch or into bed. Do not move all weekend. Stay hydrated. Call me on Monday if your condition hasn't changed.

Once at home, Terri sat on the couch. Then she laid in the bed. Then she would sit on the couch some more. Terri would get up to: A) Move from the bed to the couch, B) Use the restroom, or C) Take a shower.

David made some food. David served Terri the food. David did the dishes. Then David would repeat the process.

On Saturday, David went to the "Newborn Care Class" at Kaiser without Terri. David was the only male without his spouse at the class.

(For some reason, in this day and age, it's still draws a lot of stares when a man shows up for the "Newborn Care Class" without his wife, but the reverse doesn't even raise an eyebrow.)

David learned to change a diaper, burp a baby, and swaddle a baby! He also watched a very painful movie on circumcision (too painful to even describe in any detail!).

Terri's family came over to celebrate an early Father's Day.

One of the things we like to do with Terri's family is play a friendly game of low-stakes poker. Because Terri was on the couch, we moved the poker table right against the couch, so Terri could play without having to sit up too much.

By Sunday, there was no more T.V. to watch. David went to the library and came back with about a dozen books.

Today, we went back to the Doctor, because Terri's uterus was still feeling tight.

The good news: No other signs of early labor. No effacing, no dilations -- nothing!

The doctor thinks the minor contractions might indeed be Braxton-Hicks, but they are not sure. So to play it safe, Terri is staying home from work for the rest of the week, maybe the rest of the pregnancy.

But thankfully, there were no orders for FULL bed rest. Also no drugs, and no need to admit Terri into the hospital for closer monitoring.

Each day now is a precious day for the babies to grow and mature. The goal now is to get through each day up to Week 33. After that the goal will be to get to Week 36. 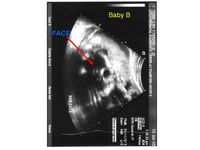 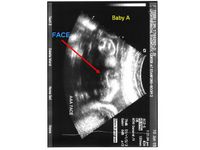 This is Week 29. Basic Training Week.

Three classes in four days for the babies, plus two different doctor's exams.

That's FIVE events in four days for the twins.

** This is a test for ANY contractions, no matter how small.
Even the smallest contraction = bed rest for Terri.