What's In a Name?

Four more days to go until the babies are due to arrive.

Things are more uncomfortable for Terri, but she's hanging in there. Today we went to Target for a brief outing, and Terri got to ride in the store "electric cart" that are reserved for people who need help with their mobility. It was pretty fun!

Here is a photo of us on our last weekend of pregnancy:

So the million dollar question everyone keeps asking us (besides, "Do you know the sex of the babies?) is -- have you picked out names for the babies yet?

The answer of course, is YES. We've had names for a while.

The next obvious question you're probably wondering is, "What are the names?"

Only four more days to find out! 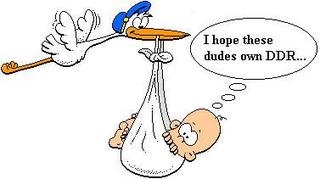 Exciting news! Our babies have a scheduled birth date!

Our final doctor's appointment and non-stress was held today. Both babies are fine, and passed their tests with flying colors.

Now for the exciting news -- the doctor has set the delivery date for Thursday, August 4, 2005.

Our original date was set about two weeks ago for Saturday, August 6. We kept that date quiet because the doctor said things could change based on scheduling at the hospital and the health of the babies and mother.

After examining Terri, the doctor decided to bump up the delivery date to August 4.

He said it so casually, "How is August 4th for you?" -- It's like we were scheduling an oil change for our car!

The delivery will be by cesarean section -- both babies are breech, and have been for a while, so we knew a C-section was probable.

On Wednesday, we have to go in for a pre-operation meeting with the anesthesiologist. Then Terri will have to stop eating on midnight the night before the C-section. We have a morning appointment, so if all goes well, the babies should be born before noon of August 6!

As expected, we are excited and a little nervous now that we have a "firm" date for the arrival of our new family members. But we are more excited than anything else, and are looking forward to next week. 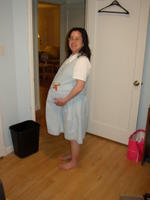 The date is signifcant (and thus worthy of a Homer-esque, "Woo-Hoo!") because Week 34 was the week our doctor hoped to get the twins to after Terri began having contractions during Week 29 (See previous post).

One of the nurses told us that babies pre-34 weeks have issues. Besides being very tiny, they can have problems holding what little weight they have, and can have trouble regulating their body temperature. A pre-34 week baby almost certainly would be in Neonatal Intensive Care, and in an incubator.

None of the above conditions were things we were looking forward to, obviously.

With the coming of Week 34, our doctor now says that if the babies come, they have a good chance of not having any issues.

(And thanks again for everyone's kind words and thoughts the last few weeks. Terri also appreciates all the phone calls during the day to break up her bed rest.)

They Test Kids Earlier and Earlier These Days . . .

Yesterday we took the kids to their Week 32 check-up and non-stress test.

Have we explained a non-stress test? Basically, Terri lays down on a bed, and a nurse hooks up three sensors to her stomach. Two of the sensor monitor the kids' heartbeats; the third monitors the uterus for electrical signals that indicate contractions.

Terri is monitored for at least 20 minutes. Within that time, the babies' heartbeats need to stay within a certain range consistent with their developmental age. Anything too high or too low on either baby could signify that one baby is starting to grow at the expense of the other, etc. If that were to happen, they would think about taking the babies out early.

The third sensor is monitoring contractions on a scale of 0-100, with "0" being no contractions, and "100" meaning the babies are on their way! Anything above 20-25 is cause for concern.

(What was interesting to learn is that all mothers-to-be have contractions throughout pregnancy, and not just Braxton-Hicks contractions. However, it's only when there are consistent contractions over a 60 minute period that there is cause for concern.)

Three weeks ago, Terri was registering contractions on the non-stress test consistently in the "20's", which prompted her work stoppage and modified bed rest.

This tests since then, including yesterday's, contained better news: No contractions higher than 15-17, and most in the 5-6's (which are common at this stage, we were told).

The kid's tested right at average for Week 32 babies, meaning their heartbeats were strong and healthy. We are so proud of them! They also seem to be sharing the nutrients and oxygen equally, for which we are also grateful.

There will be another non-stress test next week, and hereafter every week until the babies are born. With twins, a non-stress test every week after Weeks 28-30 are common -- many singlet mothers never have to get even one, unless there are issues. But for twins this is just a common precaution to make sure the kids continue to do well.

Non-stress tests really are "non-stress" for all concerned! Terri just lies in the bed and reads a magazine for 20 minutes. David sits in a chair at the foot of the bed. After an initial 5 minute reassurance in listening to the heartbeats (you can hear the "whoosh-whoosh" on the monitor), the rhythmic nature of the sound of the heartbeats makes David fall asleep!