Getting Free Stuff From Your Cereal Box is AWESOME!

A few weeks ago as Katherine was eating a bowl of "Frosted Mini-Wheats", I saw her reading the back of the cereal box intently.


As we all know, reading the back of a cereal box during breakfast is a time-honored American tradition.  Almost as American as mom, baseball, and apple pie, some might say.


"Look Daddy!" Katherine exclaimed excitedly as I joined her at the table.


On the back of the box in big bold letters were the words:  "GET AWESOME GRAND PRIX REWARDS!" 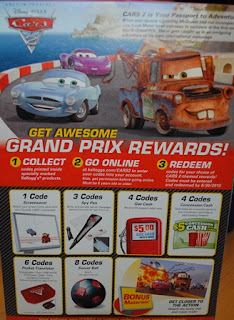 It was a free give-away to promote the movie Cars2.  Katherine explained the concept to me as intently as if she had just discovered the secret to the Grand Unification Theory.

"You see, Daddy, you collect these codes inside the cereal box.  Then you type them in online on the internet.  Then they send you a cool prize!  Isn't that AWESOME?"

"It sure is awesome," I agreed.  "Which prize are you thinking about getting?"


Katherine smiled broadly and spoke with the confidence of a six year-old.  "Oh, I'm getting the Pocket Translator.  It will let me speak in six different languages!  I'll be able to speak to kids in Africa!" 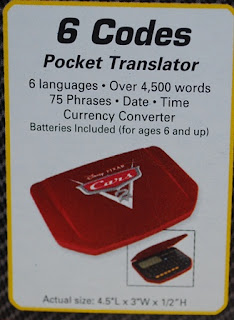 (Katherine had just learned about the continents in school that week, and Africa made a big impression on her for some reason)


"Very cool," I stated, as I turned my attention to something else.


Fast forward about two weeks.  Katherine brought me an empty box of "Mini-Wheats".


"Daddy, can we enter in these codes now?" Katherine asked.


After a few minutes of registering all my personal information and guaranteeing myself about a hundred more spam emails each day, we got to the point where you entered in the codes.  We proceeded to enter in the codes found on the inside of the box.


Make that CODE.  There was only one code per box.


For some reason, I thought there would be more than one code per box.


"Where do we get more codes, Daddy?  Where is there more cereal?"  asked Katherine.


You see, turns out Terri had gotten the box of "Mini-Wheats" on sale at a grocery outlet store where old boxes of cereal are sold.  The "Cars 2" movie had premiered in early summer, and we were now in October.


While we still had until June 2012 to redeem our codes, we only had ONE code.  We needed five more codes to get that pocket translator.


Now, at this point, let me confess that as child I was totally into free stuff that you could get for free from cereal boxes.  X-Ray goggles?  Got 'em.   Magic pen with invisible ink?  Had that.  Sea Monkeys?  Please.


So when Katherine asked me how we were going to get more codes, I took it as a personal challenge.  My daughter was NOT going to have her first try at a free cereal box prize end in failure!


I proceeded to do what any neurotic father would do in that situation.  I drove down our local supermarkets and systematically began to dismantle the cereal isles in search of the cereal boxes that might still be carrying the "Cars 2" promotion.


At our local Safeway I hit pay dirt.

Box after box after box of cereal boxes promoting a movie that went out of theaters over two months ago.


Below is a photo of the result of my quest.  I would write more, but I will be busy for the next few days eating cereal and typing in codes.  Important conversations with children in Africa awaits!!! 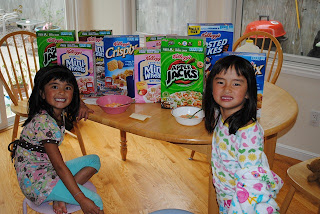