Today marks the start of Week 28.

All is well. Terri is getting bigger, and sleep is more uncomfortable. But the babies are healthy and growing.

The babies are most active in the evening, after dinner, when we are sitting on the sofa. The babies are now big/strong enough that not only can David feel them kicking, but you can see Terri's stomach moving and pulsing as they move around!

We took a photo of Terri today -- see below.

We are taking some advise from our friends about how to help quiet the babies once they are born.

Our friend Cathleen Yonahara mentioned that she had a teddy bear that played a particular song. She would place the bear on her stomach while pregnant and play the song. When her baby was born, it was useful to help get her baby to calm down when fussy.

Thus, David made a CD of various lullaby's, and now each night when we go to bed we play the CD for the kids. 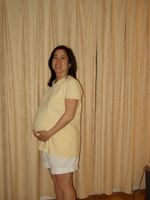 People invariably express surprise and happiness when we tell them we are expecting. But almost seconds -- no, NANOSECONDS -- after that expression of joy and happiness is THE question. The big one.

And then, when they receive our response that we are waiting until the babies are born to find out the sex, generally we receive one of the following reponses:

1) Really? But how will you know what color (pick one: A) clothes to buy; or B) to paint the room?

Honestly, many of our closest friends and families have stated, "Good for you," or similar words of support.

A co-worker, who also waited to find out the sex of his babies, best summed up his support for waiting, when he told me, "It's one of life's last truly great surprises. Who wouldn't want to wait?"

Now, in saying Terri and I are waiting, we don't mean to imply that we are somehow less eager, less excited to find out the sex of the babies. We are.

It's just that for us personally, we just want healthy, happy babies. And that's all we're hoping for. Anything beyond ten fingers, ten toes, and everything else where it should be will be GRAVY. Absolute gravy. And we can wait for the gravy.

But all of the above is not to say that we haven't been tempted to find out. For example, we decided early on that if we found out in the natural course of things, we would be equally happy to find out.

Thus, we have not shielded ourselves from watching the ultrasounds, reading the reports from the hospital, etc. If one of the babies had decided to show themselves to us in all their glory, we would have been perfectly content to find out her/his sex.

(As of this date, through all the ultrasounds, our babies have kept their legs discreetly tucked together.)

Actually, about a month ago, we thought we HAD found out the sex of the babies.

Terri was reading the fine print of our April 1, 2005 ultrasound reports for both babies. In small eight-point font at the bottom of the report was a listing entitled "Fetal Anatomy."

There, amongst more innocuous words like "heart", "upper lip", and "stomach" were words which (we thought) spilled the beans:

If you're like me, it took you about 30 seconds to dig back into basic 10th grade biology and realize -- only females have a uterus and a cervix.

("Do I have a uterus?" I asked Terri at the time, cocking my head at an angle like a dog contemplating his reflection in a pool or water.)

Armed with this knowledge, we checked the report for both babies. Sure enough, both listed a uterus and a cervix.

The cat (supposedly) out of the bag, we proceeded to inform our family. One friend cajoled it out of me at work, and couldn't contain her excitement.

At our next ultrasound, on May 13, 2005, we told our doctor we had discovered the sex of the babies.

"We read it in the report you gave us with the last ultrasound," was our reply.

"That's impossible," he stated. "We never disclose the sex of the babies in our reports."

The doctor squinted at the report. Then he started laughing.

"That's YOUR uterus and cervix," he said to Terri, then laughing a bit more at both our expense.

Our kids had pulled their first April Fool's Day joke on us.

So the wait for one of life's last truly great surprises continues. Thanks again to family and friends for their patience. (And keep those green and yellow colored gifts coming!)
Posted by David Lim at 5/26/2005 10:15:00 PM No comments:

Terri had a doctor's appointment today. The Babies are doing well. The heartbeats are strong, and they are right where they should be in terms of weight and size.

Most exciting is the fact that the Babies are now strong enough where David can feel the Babies kicking when he places his hand on Terri's stomach. Before, Terri could feel them kicking (obviously), but David was unable to feel anything. Then, for a while, David could feel small waves or ripples. But now -- it's full-on beats that David can feel! Very exciting stuff.

Our garage has started to look like the surplus warehouse for Babie 'R Us! We have two of everything -- two cribs, two baby seats, etc. etc. Thanks to the generosity of friends, however, we've gotten quite a bit of stuff on loan. Best were the cribs from my sister Suzi and her husband Bently, and the other crib from our friends Jose and Jenny.
Posted by David Lim at 5/23/2005 10:33:00 PM No comments:

Listed below are the latest ultrasound photos for the Babies for Week 25. For clearer pictures, visit our website at: 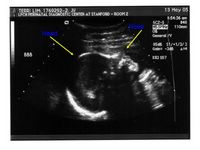 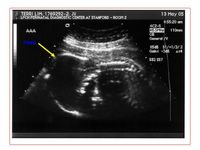 Welcome to the Lim Baby Page

Welcome to our page. We are at 26 weeks and counting until the arrival or the two Lim babies! This page is designed to keep family and friends who are interested up-to-date on the latest goings on of the Lim family babies. Check back here for more information as we post it.

Right now, the babies are very active in Terri's stomach. Lot's more kicking and movement over the past two weeks. Our last ultrasound was two weeks ago, and everything looked good. Another appointment tomorrow -- no ultrasound, just a check up.

For those of you who keep asking -- WE DO NOT KNOW THE SEX OF THE BABIES. Nor do we plan on finding out. We thought we might have found out on accident a month ago, but we were wrong, so now we will wait until the kids arrive to find out what we got!