Halloween 2015 (For Display Only- Do Not Touch, Mickey's Hands, Caroline Hearts Monkeys)

This year's kids costumes were a labor of love.

Katherine knew early on that she wanted to be Wall-E a few months before Halloween.  David helped her spray paint her body and make her eyes.  She painted the pictures on the front herself. 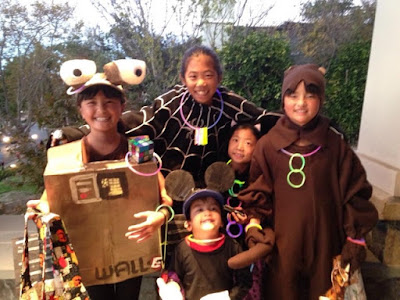 Every Halloween at their school, they have a parade which allows the students to see each other's costumes.  It can get very chaotic as they students line up and parade around the school. This year as Katherine was turning her head to look at something, when we turned back around, another student was turning the rows on her Rubik cube.  She had to tell the student to stop since that it wasn't a toy, it was a prop for her costume!

Harrison loves Mickey Mouse so I made his costume this year.  He loved it although the hands made it very difficult for him to pick up candy from the candy bowls on Halloween without it looking like he was grabbing an entire handful.  In reality, he could barely pick up even one candy with the gloves.  We ended up taking them off early on and he was much happier. 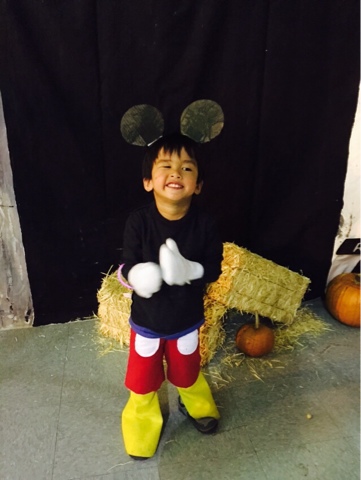 If you know Caroline, you know that she LOVES monkeys so it was no surprise when she said that she wanted to be a monkey for Halloween.  Caroline wanted to make the costume herself so we went to Joann fabrics multiple times to complete her costume.  She cut out the pattern and sewed the majority of it.  Some people didn't guess correctly what she was, but all who know Caroline well, knew that she was monkey fashioned after her favorite monkey. 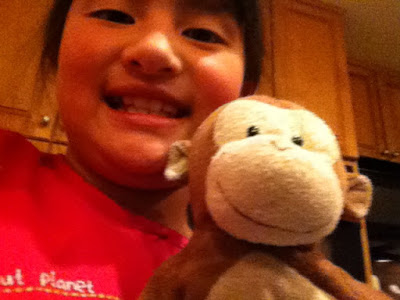 David's grandmother used to make a special Chinese soup whenever he had a canker sore.  It was known as the "yeat hay" (Chinese for canker sore) soup.  Caroline got a canker sore and asked David to make her some so he made her a pot the other night. As she was drinking it tonight from the Chinese rice bowl and Chinese soup spoon, she said "Hey Mom, do you know that this spoon says Hao?" which means good in Mandarin.  I told her, "Your Chinese is paying off!"
I find this funny in a two ways.
1). We have had that Chinese spoon for as long as David and I have been together.  That's almost 15 years.  I never noticed that there was a Chinese character on the spoon. 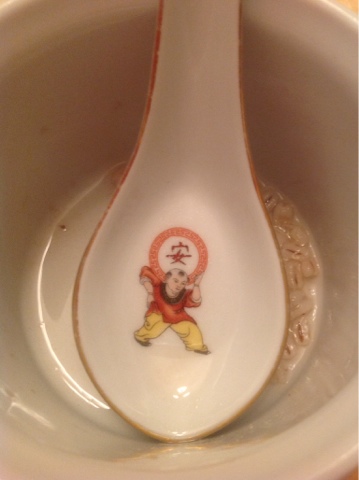 2).  Katherine and Caroline have been taking Mandarin on Sunday mornings for three years now.  They complain every Sunday about getting up to go to Chinese school but they enjoy it once they are there. They can understand some Mandarin (about 2nd grade level) and about 200 characters.  They get frustrated when they feel like they will never be proficient at it but tonight's discovery reinforced that she is picking things the language.
Grandma's soup did double duty tonight- not only as a remedy to quickly heal Caroline's canker sore; it was also an indirect Chinese lesson! 很 好 which means very good!
Posted by Terri at 11/01/2015 11:22:00 PM No comments: