Harrison is your typical 3 year-old boy.  Despite not pushing gun toys or other violent toys on him, as soon as he started pre-school and hanging out with "older" boys, he came home and EVERYTHING became a gun or sword to him.

So I finally broke down and over Thanksgiving at my parent's house, dug out my old "Han Solo Blaster" circa 1977.  It was my cherished toy as a child, and I admit it was pretty neat to see Harrison's face light up when he saw it.  He loves it.

His newest game is to play "bad guys".  To be clear, Harrison is NEVER the "bad guy."  He is always the "good guy."  He designates his sisters, mommy, or daddy to play the role of "bad guy."  Your job is than to let him chase you around while he shoots/stabs/wrestles you into submission.  He can play it for hours!

Here is a photo of Harrison "Han Solo"! 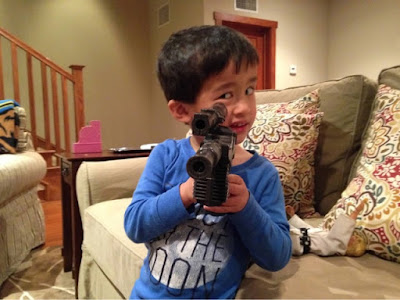