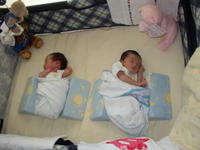 It's said that babies will recognize and be soothed by sounds they were exposed to while in the womb.

To that end, many parents play Mozart to their children during pregnancy.

Some forward-thinking parents will play lullaby tunes to their children in utero, and later use those same tunes to help calm a fussy baby.

Of course, being a die-hard Dodger fan, I exposed my children to the ultimate soothing voice -- Vin Scully.

In this era of internet connections and cable access, I am signed up to receive Los Angeles Dodger radio broadcasts over my laptop. This means that during the baseball season I am able to listen to every Dodger game on the internet, just as if I were living in Southern California.

Vin Scully is known for his unique ability to paint pictures with words that transcend merely describing a baseball game.

Vinny is so good at telling stories, Dodger fans will actually take radios to games at Dodger Stadium just to listen to him describing the action, even though the game is being played live in front of them!

[Click here to listen to a sample of one of Vin's most famous calls -- the ninth inning of Sandy Koufax's 1965 perfect game.]

Terri, of course, carried the twins in the middle of the baseball season.

That means that during the entire time she and the twins were on modified bed rest from April until August, each night we would listen to the Dodger broadcast over the internet.

Vin Scully's voice was a constant in our house all summer. It's all the twins heard while in the womb.

We joked that when the babies were born, if they were fussing, all we would have to do is turn on a tape of a Dodger game, and Vin's voice would help quiet the kids.

Well, wouldn't you know it?

My mom brought her over to the computer, where I had turned on to the Dodger game as background noise.

Vin Scully was calling the game.

And lo! and behold -- Caroline stopped fussing, turned her head, and sat quietly while Vinny called the game.

As a Dodger fan living in Giant's country, I just about wept for joy.

Creating new Dodger fans? I just might have to report you to Child Protective Services!

At least I'm raising my twins the right way!